The Future of Leadership Traits: Are they inherently feminine? 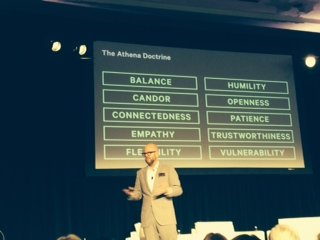 Why is a man lecturing a roomful of women about feminine leadership traits?

I was at the 3% Conference:  in San Francisco, a diversity gathering named for the dismal fact that only three percent of creative directors in advertising are women—though woman are estimated to control roughly 80 percent of household spending—and I couldn’t help but feel resistant to what I was sure was to be an old-paradigm “toughen up, ladies” motivational speech.

But what John Gerzema had to say during his keynote “Athena Doctrine: 64,000 People Can’t Be Wrong” not only opened me up to a new way of thinking about the innate power of all of us—male and female–to call upon the female characteristics we all possess to move into a more productive and more equitable future, it also convinced me that this message of transformation is especially meaningful coming from a man.

His keynote, quite frankly, blew my mind.

The core of Gerzema’s message comes from research he did for the book he co-authored with Michael D’ Antonio, The Athena Doctrine: How Woman (And the Men Who Think Like Them) Will Rule the Future. Gerzema and D’ Antonio traveled the world, surveying 64,000 people in 13 countries and came up with surprising—and surprisingly hopeful—findings about what the world needs in the next generation of leaders.

They employed inventive methodology, asking half their sample to classify 125 different personality traits as either masculine or feminine. Then they presented the traits to the other half of their sample with no talk of gender; they simply asked this second cohort to rate the importance of these traits on leadership, success, morality and happiness. The conclusions are stunning: The traits that survey respondents believed are needed for the future are the same traits that we subconsciously think of as overwhelmingly feminine.

These traits Gerzema highlighted that were viewed as being both feminine and important– balance, candor, connectedness, empathy, flexibility, humility, openness, patience, trustworthiness and vulnerability—are obviously not biologically exclusive to women. But they are traits that have traditionally been nurtured in woman and often suppressed—or even bullied–out of men. But that’s the greatest part of Gerzema’s message: We all have these theses crucial traits, we just need to train ourselves to bring them to the forefront.

That’s why I realized that hearing this vision of a new paradigm from Gerzema, a man, was so powerful for me: He’s saying he needs to embody this shift in thinking as much, if not more, than women do. Because this isn’t really, at its core, a diversity issue. There’s more at stake here than bringing women up to full representation in their respective fields or changing the gender composition of boardrooms or affecting change in media images. What’s at stake is how everyone is going to work together in the future and how leaders—both men and women—need to understand this shift or find their leadership skills outmoded and obsolete.

“We live in a world that’s increasingly social, interdependent and transparent,” Gerzema said during his presentation, “And, in this world, feminine values are essential”. He described how the most innovative people are breaking traditional structures and embracing the values of collaboration, empathy and flexibility; how people are using their feminine values and energy to make the world and the workplace a better environment.

I describe my executive coaching at Kraft Your Success as transformational leadership and that word—transformational—has taken on new meaning and urgency since the 3% Conference. I’m working to integrate these concepts even deeper into my training and am excited to help prepare leaders and teams for the new demands and rewards of this interconnected, collaborative future.

The paradigm is already shifting. Are you prepared?